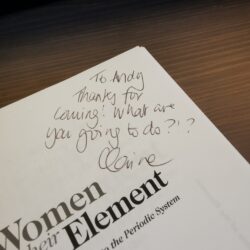 In February 2020, Irish chemist Claire Murray provoked me. She spoke clearly and passionately at one of the last professional meetings I went to that was unaffected by lockdowns and social distancing. It launched a book called ‘Women in Their Element’, telling the often-overlooked stories of female scientists involved in filling in the periodic table of chemical elements. And it has changed how I work ever since.

In her talk Claire went beyond recapping her chapter, jointly written with Jess Wade, the pioneering activist on gender bias in science, on discoverers of the superheavy elements at the bottom of the periodic table. She also revealed the biases that have prevented women from being as successful in science as they should be. These include sexism, harassment, and stereotypes that women shouldn’t be scientists. Altogether this leads to a ‘leaky pipeline’, where fewer female scientists progress to more senior levels than male ones. Similar leaky pipeline issues also face Black, Asian and other ethnic minority scientists.

END_OF_DOCUMENT_TOKEN_TO_BE_REPLACED

All gas and bulls**t. That’s me – or so some of my critics think. And this time they’re right, although not in the way they think they are. Over recent months I’ve been delighted to work with the enormously talented Adam Levy, better known as ClimateAdam, on a couple of videos. They deal with just Read more about Becoming more than an old gasbag: Climate chemistry on YouTube, cryogenic energy storage, and community renewable energy[…]